Investor optimism continued its rise in August amid mounting hopes for a COVID-19 vaccine and data reaffirming solid global growth.

The S&P 500 reached an all-time high in August as its rally from pandemic lows accelerated.

After the sharp drawdown in February and March, equities have posted a 36.5% gain over the past five months, their largest five-month gain since 1938. Smaller-cap U.S. stocks gained 5.6% in August. Smaller caps are still negative on the year (down 5.5% year to date), whereas larger caps are nearing double-digit gains. 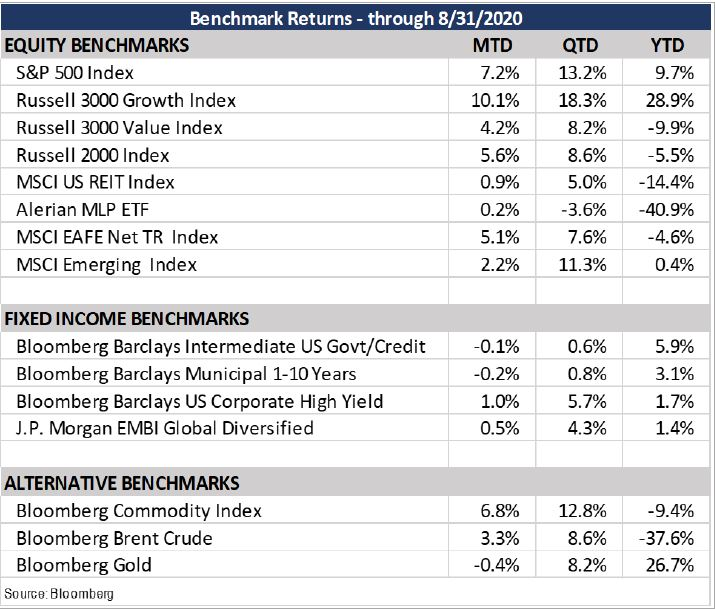 The often-highlighted divergence between growth and value stocks continued to favor growth during the month. U.S. growth stocks gained 10.1% in August and are now up 29% this year. On the other hand, U.S. value stocks returned 4.2% last month and are still down nearly 10% in 2020.

Returns were also positive in foreign stock markets; however, they trailed U.S. equities during the month. Developed international stocks rose 5.1% in August, as they continue to dig out of their year-to-date hole—now down just 4.6% in 2020. Emerging-market (EM) stocks were the laggard among the main equity asset classes—gaining 2.2% in August. For the year to date, EM stocks are now flat.

Treasury rates at the longer end of the curve inched up during the month. Core taxable and tax free bonds ended August slightly down. Credit markets noticeably underperformed equities. U.S. high yield gained only around 1% over the month. U.S. corporate bonds (Bloomberg Barclays US Corporate Aggregate) lost around 2% in aggregate, a break from the recent monthly trend of credit outperforming equity. Heavy corporate bond issuance across the quality spectrum may explain the underperformance, in part. The rise in Treasury rates also hurt total returns.

Fixed income investors have had to reconcile concerns over COVID-19’s persistence and the lack of renewed fiscal stimulus with the Fed communicating that it will allow inflation to overshoot its target to help anchor inflation expectations, along with high Treasury bond issuance.

Federal Reserve chair Jerome Powell’s virtual Jackson Hole speech was noteworthy during the month. Fed officials had already signaled plans to keep interest rates pinned near the zero bound through at least the end of 2022. Furthermore, in his August speech, Powell announced updates to the Fed’s Statement on Longer-Run Goals and Monetary Policy Strategy. 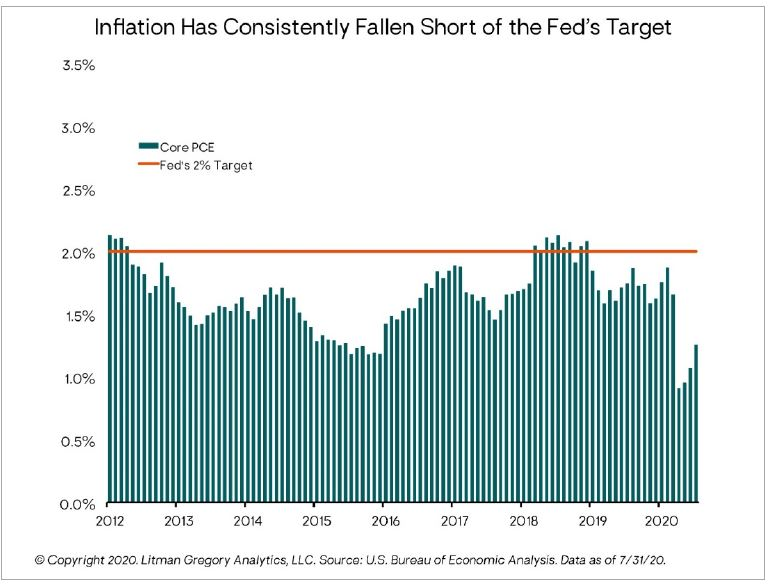 Back in 2012, the central bank put out its first statement on “longer-run goals” and in it they adopted an inflation target of 2%. Since then the economy has largely undershot this target (see chart below). In an update to this statement, the committee now “seeks to achieve inflation that averages 2 percent over time, and therefore judges that, following periods when inflation has been running persistently below 2 percent, appropriate monetary policy will likely aim to achieve inflation moderately above 2 percent for some time.” It essentially means that policymakers are now more willing to tolerate an overshoot on inflation.

Skeptics might wonder why the Fed would raise the inflation bar when it hasn’t been able to hit their target in the first place. Except for a couple of years leading up to the 2008 financial crisis, inflation has not been over 2% in the last two decades. But the change in framework has as much to do with the Fed’s other mandate: promoting maximum employment. As Minneapolis Fed president Neel Kashkari noted in a recent interview (Bloomberg’s Odd Lots podcast), the tightening that began in 2015 was a mistake that was predicated on a misreading of the labor market. The Fed thought we were at full employment and that they needed to hurry up to raise rates before inflation came. Obviously, inflation did not come despite employment reaching levels that were previously thought to be inflationary. The mistake wasn’t missing their inflation target, it was slowing the recovery in the labor market due to fears that inflation was around the corner. By targeting higher inflation, the Fed is basically signaling they will hold off on hiking interest rates the next time the labor market is strong. With the unemployment rate around 10%, it could be a long time until the Fed moves rates from current levels.