In October, global stock markets started out strong, gaining 5% through October 12, but then fell 7% over the remainder of the month. Larger-cap U.S. stocks fell 2.7% in the full month, while developed international stocks dropped 4.0%. U.S. small-cap and Emerging-market (EM) stocks were both positive in October each gaining 2.1%.

Markets were particularly jittery during the last week of October. The S&P 500 fell 5.6% in the final week. The main culprits for the heightened volatility likely include (1) surging COVID-19 cases in the United States and Europe, (2) uncertainty around the election, and (3) Congress’s inability to pass additional fiscal support for the economy in the short term. 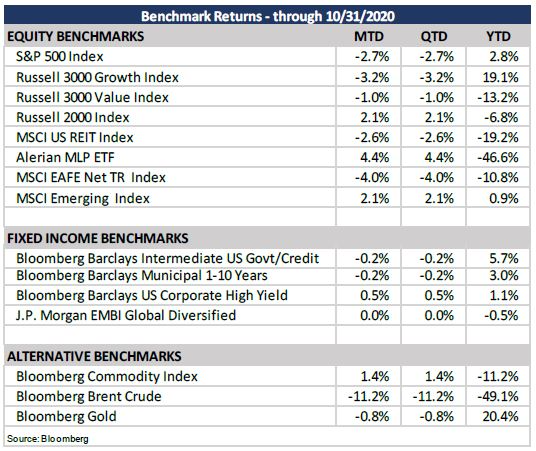 As the U.S. economy opened up over the summer, GDP has sharply rebounded off the lows. The Bureau of Economic Analysis put out their advance estimate for real GDP growth and they pegged it at 33.1% for the third quarter. It was the highest GDP growth print on record, but it is growth off a low base in the second quarter (which was the worst GDP decline on record). With the sharp ride down and back up, the economy is still 2.9% below where it was one year ago and 3.5% lower than where it started the year. This year’s shutdown and reopening of the economy has thrown off the scale of many economic charts. The readings from 2020 have literally been off the charts. Real GDP growth is just one example. 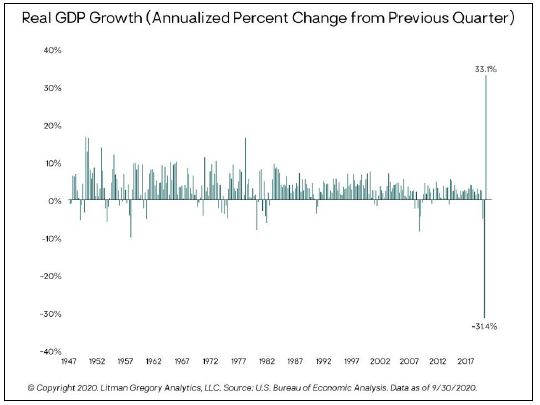 Foreign equity markets were mixed during October. EM stocks outperformed developed-market stocks with a gain of 2.1%. EM Asian stocks helped the most in October. Chinese stocks (MSCI China Index) gained 5.3% and the broader EM Asia region (MSCI EM Asia Index) gained 3.3%. On the whole, that region of the world has so far done a better job navigating the current pandemic. The other main developing regions within the EM index, Europe and Latin America, were negative in October. EM Europe (MSCI EM Europe Index) was the hardest hit with losses of nearly 10%. Many European countries are now dealing with a large second wave of COVID-19. Many developed European economies have re-entered full or partial lockdowns to try to limit the spread of the virus. European equities fell 5.4% in October (Vanguard FTSE Europe ETF), which dragged down the broader foreign developed markets index into negative territory (down 4.0%).

Within the fixed-income markets, the long end of the Treasury curve steepened during the month. The seven-, 10-, 20-, and 30-year rates each increased by about 20 basis points in October. The often quoted 10-year rate finished at 0.88%, up from 0.69% at the start of the month. The steepening yield curve was largely perceived as beginning to price in a “blue wave” sweep for the Democrats in the election. A big win for Democrats is believed to have the potential for more aggressive fiscal stimulus, aid for state and local governments, and infrastructure spending—all of which would require more Treasury issuance in the coming months and years to fund the spending. In October, the gap between five-year Treasury rates and 30-year rates hit its widest gap since 2016.

Higher rates hurt U.S. core bonds for the month leaving them slightly down at 0.2%. Treasury bonds fared worse with a loss of 1.4% for the 7 to 10-year maturity portion of the Treasury market. Credit-sensitive areas of the bond market did relatively better due to further credit spread tightening during October. U.S. high-yield bonds gained 0.5%.

As of this writing, we still do not know the outcome of the U.S. presidential election. Election night has come and gone without a clear-cut winner. There is the potential for a drawn-out, contested, and litigated outcome. But we do know that the polls were largely off (again), and the election is much closer than many pundits thought it would be. It’s important to remember that bull markets usually die by excess, not by a change in the Oval Office or a new tax policy.

While our base case calls for economic growth to persist, we don’t think markets are providing much margin of safety for unexpected political or geopolitical risks.